We all know the stress dead bodies pass through before they’re buried. Being cut open for autopsy and the chemicals injected to preserve one’s body at the morgue is simply pathetic.

Well, one Nigerian lady said she can’t tolerate going through those things when she dies. So she opted for the Muslim way of burial. That is, she wants to be buried in 24 hours after her death.

According to the Twitter user @Liliestbaby, she wants to be buried within 24 hours after her death, adorned with the finest white aso oke, red lipstick and a lit gele. She tweeted;

READ ALSO:  Lady goes straight to her father's mechanic shop to celebrate with him after graduating from University 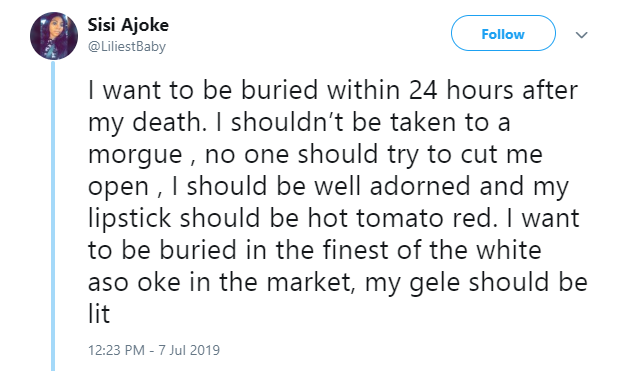 Pastor slumps and dies while preaching in his church

Lady traveled 18 hours to see her boyfriend, only to meet his main girlfriend

‘Everything negative, pressure, challenges is all an opportunity for me to...