Ghanaian gospel musician based in the United Kingdom, Sonnie Badu, has fired back at critics who challenged the authenticity of his three academic degrees.

After describing his critics as frogs, Mr. Badu via a Facebook Live session last night urged persons criticizing him to desist from such acts.

“Those doing this should be careful. I am actually working on my PhD in Theology as well. I am done with Philosophy, I am doing my Theology. I just don’t come out to tell the world this is what I am studying,” he said.

He also added that he “worked hard” to earn all the laurels he has today.

He also said: “When I started ministry, some of you were students in school– Senior High, Junior High, or whatever– but today the internet has given you the strength and voice to talk”.

“I don’t even know how old they are and the audacity they have to disrespect other people….it doesn’t move me, it doesn’t touch me because I know their mindset. That’s why I don’t live there, I know the mindset of my people.”

This comes on the back of the backlash Sonnie Badu received after he claimed that he has been awarded three degrees in a space of four months.

He had said that apart from his two honorary doctorate degrees, he also has a PhD, a master’s degree, and a bachelor’s degree.

But a Twitter user called @mnm_mensa said after using Google Scholar search and emails to dig deep into all Mr. Badu’s certificates, he found no results.

The tweep said he also reached out to the Council for Higher Education Accreditation – the institution responsible for the accreditation of all universities and colleges in the United States of America – to confirm if Trinity International University of Ambassadors, a place Sonnie Bodu acquired most of his certificates existed, but the feedback proved otherwise. 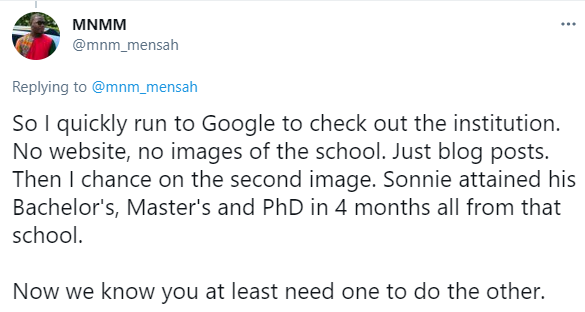 This has re-ignited the conversation of how people buy academic titles for themselves without necessarily working for them.

Sonnie Badu is also the founder of Rock Hill church in the United States of America.