It may sound unbelievable, but there is a list of people who bought land on moon.

After thorough research, we were able to uncover some of the names of those who bought land on the moon.

However, there are some known names — which are celebrities — who made the news for buying land on the moon.

“…we can reveal that approximately 675 very well known celebrities and three former Presidents of the United States of America are now extraterrestrial property owners and own moon real estate. This includes approximately 15 main actors from the original Star Trek series, as well as the Next Generation and Voyager series.“, Lunar Embassy indicated on their official website.

Talking about their dedicated clients, Lunar Embassy mentioned that “the list of people who buy them is endless. Dentists, lawyers, nurses, space hobbyists, trekkers, doctors, taxi drivers, policemen and up to now, about 30 NASA employees. At the last count over 6,011,311 people are already proud owners of their extraterrestrial property, with properties on the Moon being the hot forerunner of course (because these are the only properties you can easily see from Earth).”

Now let’s take a look at the list of people who bought land on moon:

Shah Rukh Khan, also known by the initialism SRK, is an Indian actor, film producer, and television personality. Referred to in the media as the “Baadshah of Bollywood”, “King of Bollywood” and “King Khan”, he has appeared in more than 80 Hindi films, and earned numerous accolades, including 14 Filmfare Awards.

According to reports, SRK received a piece of moon as a gift from a fan.

The late Indian actor is also one of the popular people who bought a land on the moon.

Sushant Singh Rajput had bought a piece of lunar land on the far side of the moon. The region that he bought is called the Mare Muscoviense or the ‘Sea of Muscovy.’

The late actor had bought the property from the International Lunar Lands Registry.

Barbara Jill Walters is an American retired broadcast journalist, author, and television personality. Known for her interviewing ability and popularity with viewers, Walters appeared as the host of numerous television programs, including Today, The View, 20/20, and the ABC Evening News.

Thomas Cruise Mapother IV is an American actor and producer. He has received various accolades for his work, including three Golden Globe Awards and three nominations for Academy Awards. He is one of the highest-paid actors in the world.

John Joseph Travolta is an American actor and singer. He rose to fame during the 1970s, appearing on the television sitcom Welcome Back, Kotter and starring in the box office successes Carrie, Saturday Night Fever and Grease.

Nicole Mary Kidman AC is an American-born Australian actress, producer, and singer. She has received an Academy Award, two Primetime Emmy Awards, and five Golden Globe Awards. She was ranked among the world’s highest-paid actresses in 2006, 2018, and 2019.

Ronald Wilson Reagan was an American politician who served as the 40th president of the United States from 1981 to 1989 and became a highly influential voice of modern conservatism. Prior to his presidency, he was a Hollywood actor and union leader before serving as the 33rd governor of California from 1967 to 1975.

He is also said to have bought a land on the moon.

James Earl Carter Jr. is an American politician, businessman, and philanthropist who served as the 39th president of the United States from 1977 to 1981. A member of the Democratic Party, he previously served as a Georgia State Senator from 1963 to 1967 and as the 76th governor of Georgia from 1971 to 1975.

George Walker Bush is an American politician and businessman who served as the 43rd president of the United States from 2001 to 2009. A member of the Republican Party, he had previously been the 46th governor of Texas from 1995 to 2000.

10. Rajasthan man who bought moon for his wife

IndiaToday reports that a man from Rajasthan who wanted to do ‘something special’ for his wife decided to buy land on the moon for her.

The man ‘gifted’ his wife three acres of land on the Moon on their eighth wedding anniversary. Dharmendra Anija said he ‘bought’ land on the Moon as he wanted to do something special for his wife, Sapna Anija.

READ ALSO:  Who was Breck Denny and what was his cause of death? Tributes Pour In As “Actor” passes away

Also from India, Neeraj Kumar, a resident of Bodh Gaya, had also ‘bought’ one-acre land on the Moon on his birthday.

With this, Kumar, a businessman, has become the first person in Bodh Gaya to buy land on the moon.

Kumar said that he always wanted to go to the moon but since this was not possible he decided to buying land there.

He also said that the amount he paid was not too much, but the process was difficult.

“In the news, we saw many big people like Shah Rukh Khan, recently deceased actor Sushant Singh Rajput, and others who bought land on the moon, after which I started collecting information about it. I came to know about the online sale and purchase of land on the moon by a US society ‘Luna Society International’,” said Kumar.

He further said, “Then I contacted the society through Google and applied for one acre of land in October of 2019. I had given around Rs. 48,000 at that time … money was converted from Indian rupees to dollars. After a lot of online paperwork, I got a message on July 4, 2020, that my deed had been completed,”

You can also check out: A List of Those Who Won’t Make Heaven in Nigeria

12. Surat businessman buys a land on the moon for his two-month-old son

Around the world, every child is the apple of their parent’s eyes. The parents go out of their way to shower them with love in various ways.

However, a businessman from Surat named Vijaybhai Kathiriya decided to do something for his two-month-old son that is out of the world, quite literally. He purchased an acre of land on the moon for Nitya, his young son.

Kathiriya sought permission to do from the International Lunar Registry situated in New York. He sent an e-mail to get approved on March 13. Soon, he got the green light and submitted all the documents that were necessary for this.

The family received a certificate from the company which was named after their son. The land they purchased is located at ‘Mare Moscoviense’ which means ‘Sea of Muscovy’ that is located on the far side of the celestial body.

The real price was not quoted by the reports. However, buying land there is said to cost around $750, which is over 50,000 in Indian rupees.

By doing this, Vijaybhai Kathiriya bagged the record for being the first businessman from Surat to purchase land on the moon.

Physically, one cannot own property on the moon. The certificate is the only thing that the customer acquires when they purchase it. For many, this is considered to be a valuable gift. A man from Rajasthan named Dharmendra Anija bought around three acres of land on the moon and gave it as a wedding present for his wife, Sapna Anija.

13. A Pakistani Man Claims to Have Bought Land on Moon for Wife as Wedding Gift.

A Pakistani man has surprised everyone with his unique and unconventional choice of wedding gift for his wife.

Sohaib Ahmed from Pakistan’s Rawalpindi decided to move beyond the conventions of gifting jewelry, cars and other things. Hence, he decided to gift her a piece of land. On the MOON.

Ahmed has reportedly bought one-acre lunar land in the region called ‘Sea of Vapour’ for his wife as a wedding gift. The land was bought at a cost of $45 from the International Lunar Lands Registry.

Ahmed said he wanted to do something different and hence bought a piece of lunar land after he heard that the late Bollywood actor Sushant Singh Rajput had bought a ‘piece of moon’ in 2018. Rajput reportedly bought the land in a region called Mare Muscoviense, or the ‘Sea of Muscovy’.

Several celebrities including Tom Cruise and Shah Rukh Khan reportedly ‘own land on the moon’.

In a video that has been shared on social media platforms, the couple is seen telling a reporter from a local news channel how their friends had a hard time believing that they actually bought the land. He also shows the papers he received. Sohaib’s wife Mediha told a local news channel that now one of her friends also wants her fiancé to gift her a plot of land on the moon for their wedding.

Pakistani man buys land on moon for his wife as a wedding gift… ?? pic.twitter.com/qdsZSYu0Tj

The couple received the documents at their home via US Postal Service.

Parents go over the moon at the birth of their children. But a man from Kendrapada district has gone a step further by buying a piece of land on moon as a gift for his newborn daughter.

As per reports, Avaya Kumar Senapati of Kupuni village in Pattamundai block has bought an acre of land on moon for over Rs 10,000 through the US-based Luna Society International and gifted it to his daughter Aditi , who was born on January 15 this year. 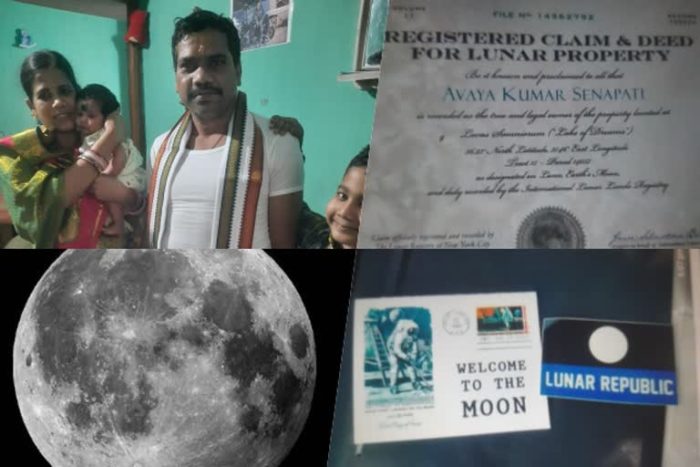 “I wanted to give a special gift to my daughter. With the help of a friend from USA, I bought one acre of land on moon through the Luna Society International,” said Avaya.

The Luna Society International, which wants to establish sustainable human bases on moon, has sent Avaya a ‘property registration’ document, mentioning the location of the land purchased, longitude and latitude, and other details.