A piece of sad news has been recorded today March 21 in Jos, Plateau State capital – Nigeria. It’s about…

A piece of sad news has been recorded today March 21 in Jos, Plateau State capital – Nigeria.

It’s about a man that sadly died on his wedding day.

Giving details of how everything happened, an eyewitness said the deceased identified as Samuel Yarling had gone to pick his wedding suit at his sister’s house at about 12am but slumped and sustained a slight bruise on his head. 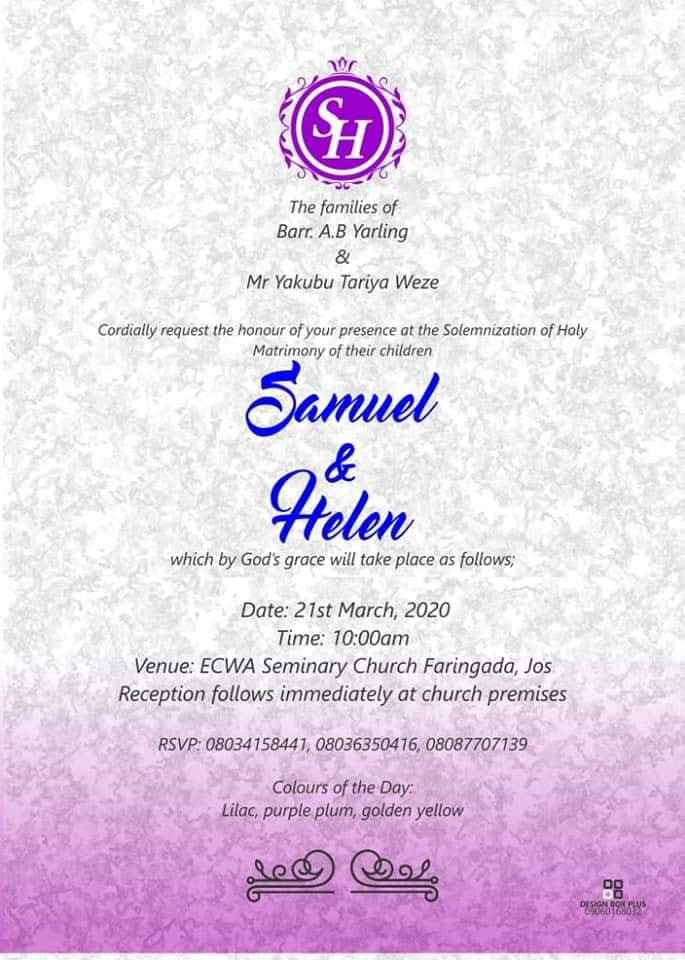 After the incident, he was treated at a nearby drugstore after which he returned to his guesthouse where he was supposed to lodge whiles waiting for the D-day to come for him to wed his wife.

However, upon his arrival, he began throwing up uncontrollably.

Samuel who was then rushed to Bingham University Teaching Hospital for treatment, was confirmed dead on arrival.

Samuel Yarling was preparing to marry his bride, Miss Helen Weze, a nurse who according to the family is currently on admission at the Bingham University Teaching Hospital (BHUT) after going into shock on learning about her soon-to-be husband’s death. The couple’s wedding was scheduled to hold at ECWA Seminary Church Faringada, Jos.

Meanwhile, late Samuel’s friends have taken to Facebook to mourn his death.

Samuel Yarling was my colleague while at the Airtel Customer Care Centre. He was a jovial jolly good fellow.

We kept in touch even after ‘retiring’ from the call center we chatted and often joked about life and marriage.

Recently his pre-wedding pictures sprung up and i was super happy for him. I teased him and we laughed after which i wished him well.

Today was meant to be one of his happiest days but as fate would have it, he slummed and died today while getting ready for the great event.

Its been a day of sober reflection. Life is empty. Life is full of mysteries. May God heal and console all those grieving around the world.

May he grant us the wisdom to number our days and be straight in our dealings. Indeed this is not our home. 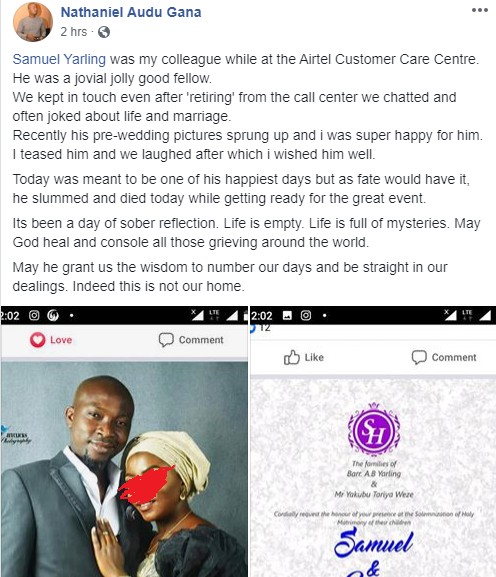 WHAT A WORLD!
A groom-to-be, Mr Samuel Yarling, of Lamingo, Jos, has reportedly died on his wedding day leaving his bride-to-be and both families devastated.

The wedding which was slated for March 21 been today,at the ECWA Church Seminary, had sent two families into mourning after the sudden death of the groom.

Late Yarling was set to marry his beautiful damsel, Miss Helen Weze, a nurse, who according to the family is currently on admission at the Bingham University Teaching Hospital (BHUT) after going into shock, on learning about her soon-to-be husband’s death. 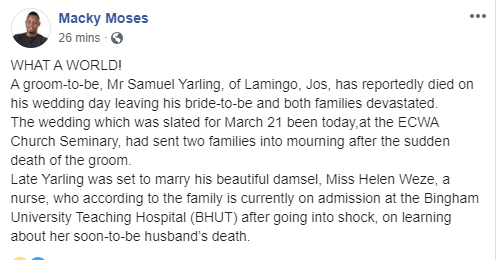 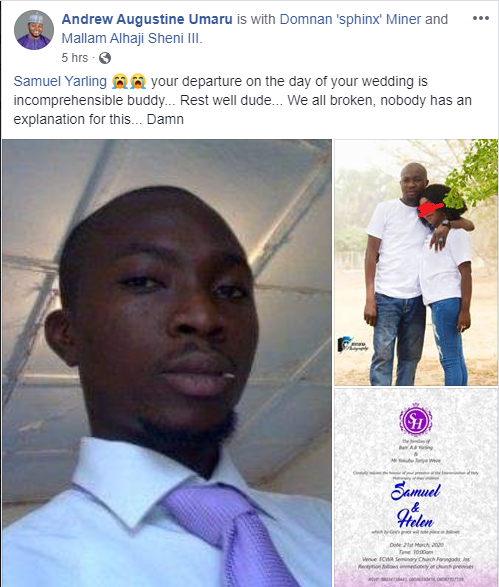 Man and woman can never be equal – Efia Odo

Hushpuppi and Mr. Woodberry extradited to the United States