Following the gruesome murder of the assemblyman for the Sogakope South electoral area in the Volta Region, angry residents have…

Following the gruesome murder of the assemblyman for the Sogakope South electoral area in the Volta Region, angry residents have once again blocked the main Accra-Aflao road at the Sogakope bridge.

The recent development followed the visit of the Volta Regional Minister, Dr. Archibald Letsa to the area to commiserate with the family of the late assembly member.

But some of the protesting residents said mere comments from the minister will not improve their security. 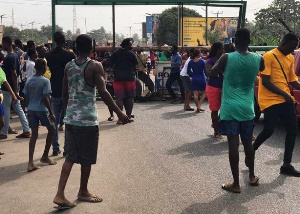 READ ALSO:  “How I got pregnant as a virgin” - woman shares her unusual story

The residents also reiterated their unhappiness with police conduct in the area.

“When there is an incident and they call them, they will never rush. Sometimes the rush and hide at the crime scene. They can’t shoot. sometimes they will say don’t have bullets in the gun which we can’t understand.”

The protesters also demanded that “they send all [the police] away and bring new people from different places.”

Another resident said the community wants some military presence in the area.

“We want soldiers. The police are not working. Let the soldiers come,” she said.

The assembly member, Marcus Mawutor Adzahli, who doubles as a mobile money merchant, was shot and killed at his residence early on Sunday morning.

He was found with multiple bullets and stab wounds. His wife and child are also in critical condition at the District hospital.