Upcoming rapper, Kweku Smoke has branded himself as a loudmouth who speaks his mind without fear or favour.

This was evident during his ‘war’ with Shatta Wale when they had their misunderstanding.

Every now and then, he throws indirect jabs at the dancehall musician.

Although he doesn’t mention his name, decoding the message would give you an idea of who he is referring to.

He attacked anyone who tried to disagree with him on a series of tweets that he made.

One of such tweets is actually making waves across social media platforms.

READ ALSO:  What do you expect from us when the big artists are shooting 1K videos - Kweku Smoke asks

In the tweet, he stated that he doesn’t care if someone is able to garner 9million views in 2seconds.

Given the fact that Stonebwoy was the person who made news recently for hitting over 1 million views on Youtube within 24hours, a lot of social media users are saying he’s the one Kweku Smoke is referring to. 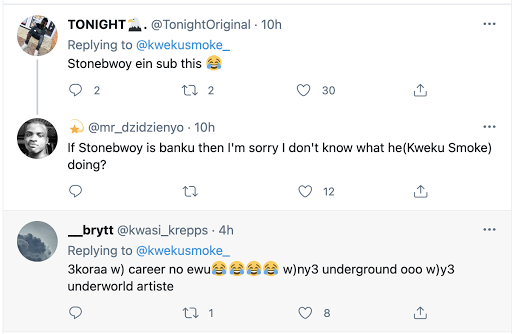 A lot of other netizens are also wondering why Kweku Smoke would decide to insult 1Gad because there is no known history of feud between them.

However, what we can state for a fact is Smoke is an ardent Sarkodie fan.

And we can all agree that Sark and Stonebwoy fell out last year after some misunderstanding ensued between them at the Black Love Concert.

So could Kweku Smoke be attacking Stonebwoy because of his affiliation to Sarkodie as a fan?

Well, let’s keep our fingers clenched to see where this leads.