Serwaa Amihere and King Promise are seeing each other and trying hard to keep it a secret but we guess they aren’t working hard enough towards that or we’ve work harder than their efforts. FameBugs learned of the pair’s secret relationship late 2018.

Keeping a close eye on them, Serwaa briefly passed through King Promise’s “Promisland” concert on December 15 to support the young man but it was not just a platonic support, there was a sweet hidden intention behind it.

King Promise used to live in an East Legon apartment with his squad and the GhOne Tv Presenter frequents that hood a lot. “When she comes, she goes straight to his room and never come out until she’s leaving” our third eye noticed and added that “she can hide o”.

The “Selfish” singer after his return from America, has relocated with his squad to a different home still in East Legon and the story is the same. Though most of Peezy’s friends or people his manager works with, don’t know the new house yet, Serwaa knows and goes over and as usual never come out until she’s leaving because she doesn’t want to loiter about to be noticed. “Boss this house you can’t enter o, even if you enter you’ll see her car but you won’t see the human being” our source told us.

Last night, there was a twist as the two showed up at Twist (a night club in Accra) and caused a bit of stir from people who noticed them all about each other. However, words we gathered are that Serwaa wasn’t feeling too comfortable so the pair left in a short time. Since public appearance is coming in now, then you should likely expect an announcement soon. 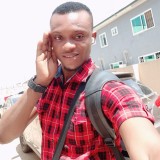 He's a co-founder of celebritiesbuzz.com.gh. He has deep love for African Music. He loves to travel, loves swimming and he's that guy who wants to put a smile on the face of everyone.